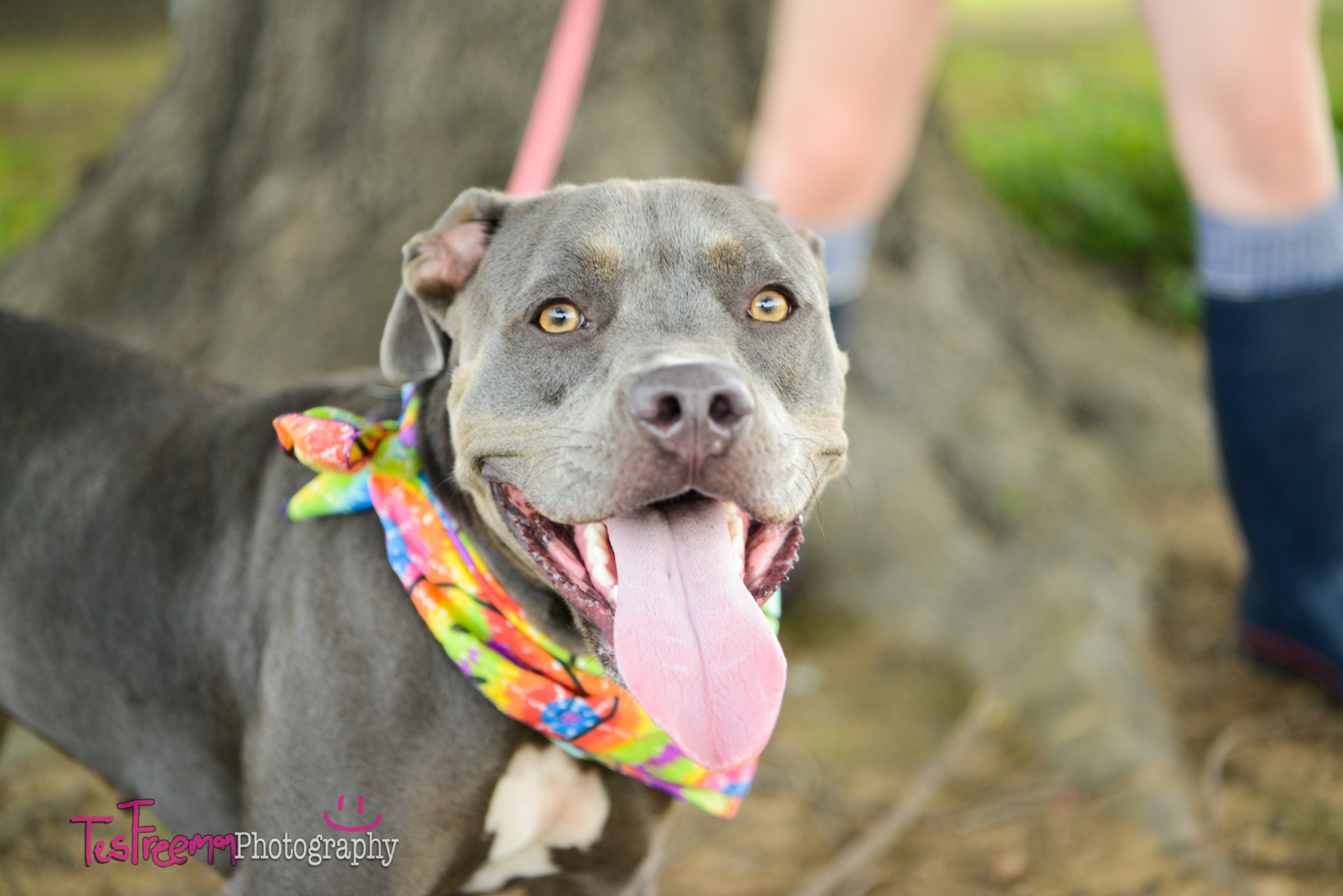 One day at Ahimsa Rescue Foundation a female bulldog mix named Baylee was surrendered to Ahimsa.  Baylee’s family had to move and could not take Baylee along.   It was a sad day when Baylee’s former family slowly drove away from Ahimsa Rescue Foundation.  The children were looking out from the car’s windows crying and screaming loudly for their beloved canine family member Baylee.

Baylee, too was traumatized.  She had a puzzled and worried look on her face as she stood (actually jumped around on leash) in Ahimsa’s parking lot and saw her family drive away without her. She wanted to follow after them; however, things did get better and brighter for Baylee quickly.

It didn’t take long for Baylee to settle in and begin to feel better at Ahimsa Rescue Foundation.  Ahimsa is run by a team of “animal loving volunteers” who provide 100% of the daily care and welfare to the animals at Ahimsa.  And neither did it take long to see that Baylee was a very nice dog.

Baylee moved to a private home in foster home at Ahimsa Rescue Foundation.  Baylee was sweet and friendly.  She had a good temperament and was good with other dogs. It also turned out that Baylee had a lot of love and sloppy kisses to give too.  She was a very nice dog who had found herself homeless at no fault of her own.

And then one day a nice and nice and pretty girl named Megan and her handsome canine son named Titus came to meet Baylee.  It was love at first sight for all.  Baylee loved Megan.  Megan loved Baylee.  Baylee and Titus were quite fond of each other too as they ran off playing and exploring together in one of Ahimsa’s large, shady and  fully fenced yards; however, there was one problem.  Baylee seemed to be experiencing some discomfort with one of her back legs.  Before Baylee’s adoption could take place she had to go for x-rays.

X-rays revealed that Baylee had not only 1 bad knee but 2 bad knees.  Both back knees needed an expensive TPLO surgery involving nuts, bolts, plates and screws for over $5,000. The surgery was not only expensive but each knee would be operated on separately with a 90 days recovery/rehab with each.  So what next?   Megan quickly got to work and raised every single penny for sweet Baylee’s surgeries, and Ahimsa’s foster family continued to keep Baylee during her recovery and rehab time.

Baylee has now completed the surgeries and recovery on both back knees. She is now living at her new home with Megan and canine brother Titus. Baylee’s surgeon has released her and has given her permission to run, play and be a “wild child”!

Thank you Megan for all that you have done for Baylee.  Because of you she has two good knees, a wonderful new life and home with you and Titus.    Thank you Megan for making adoption your first option!    “To measure the man measure his heart.”  Malcolm W. Forbes

There are many wonderful dogs like Baylee who find themselves homeless at no fault of their own.  Please make adoption your first option!